After a long, hot, and wonderful day of safari-ing, Mandy and I arrived back to our lodge, The Hippo Camp, where we would stay the night. Overall we enjoyed our stay at The Hippo Camp, but there were definitely some mishaps that luckily we can laugh about now. 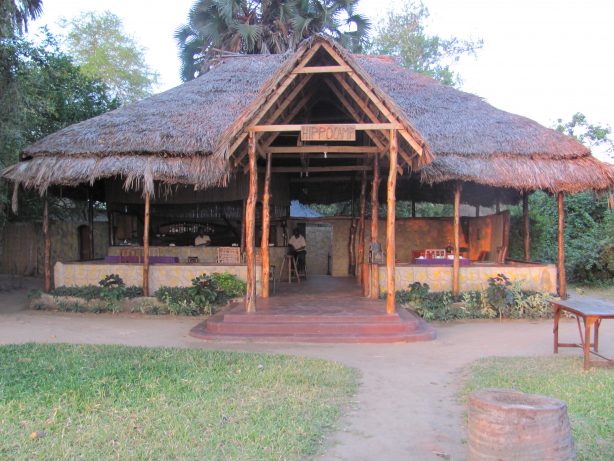 After showering, we made our way to the bar/restaurant area to chill while dinner was prepared. We overlooked the lake, listened to the hippos talk to each other, and took tons of photos. It was pretty serene and a total “Woah, I’m in Africa” moment. 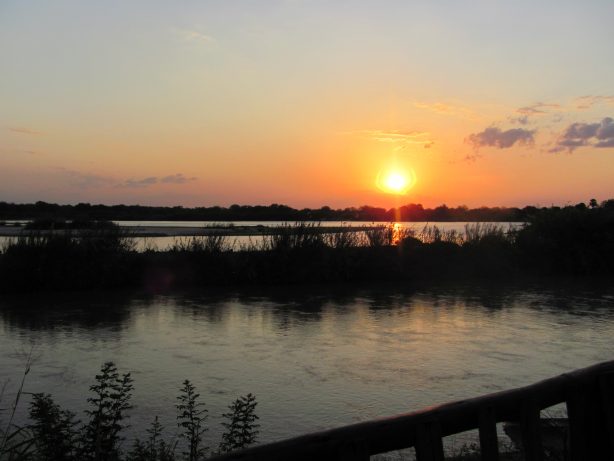 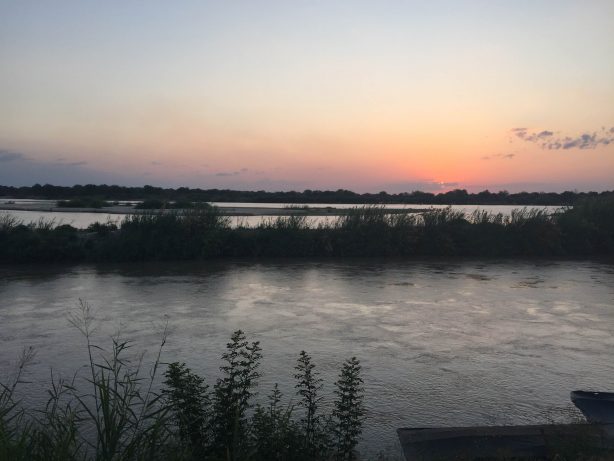 We were sat on a bench, talking about our jobs back home, when we suddenly heard the leaves above us rustle. Then, a coconut fell, seemingly from the sky, and hit Mandy directly on the center of her head. She screamed and fell to her knees while cradling her head in her hands. When she looked up at me, I saw a pretty substantial amount of blood covering her right hand. I muttered expletives under my breath as I wondered how the heck we were going to treat a head injury in the middle of the African bush. I knew that Mandy had a traumatic brain injury two years ago where she lost consciousness, which contributed to my worry.

The coconut hit her with such force on impact that all of the staff and the other three guests came running when they heard it. At this point, Mandy is understandably crying, shaken, and worried about her injury. As I knelt down to assess, an Indian woman, who was also a guest at the lodge, grabbed Mandy away from me and poured a liter of cold water all over her head and torso, all while cradling Mandy in her bosom.

“Stop crying, stop crying! God saved you from big injury and only gave you small injury so say thanks to Him!!!!”

I could tell that Mandy was stressed out by this woman (and so was I), so I politely told the woman that I am a nurse and that she needed to back off so I could look at Mandy’s head. She responded by yelling, “YOU GO PRAY GOD.” 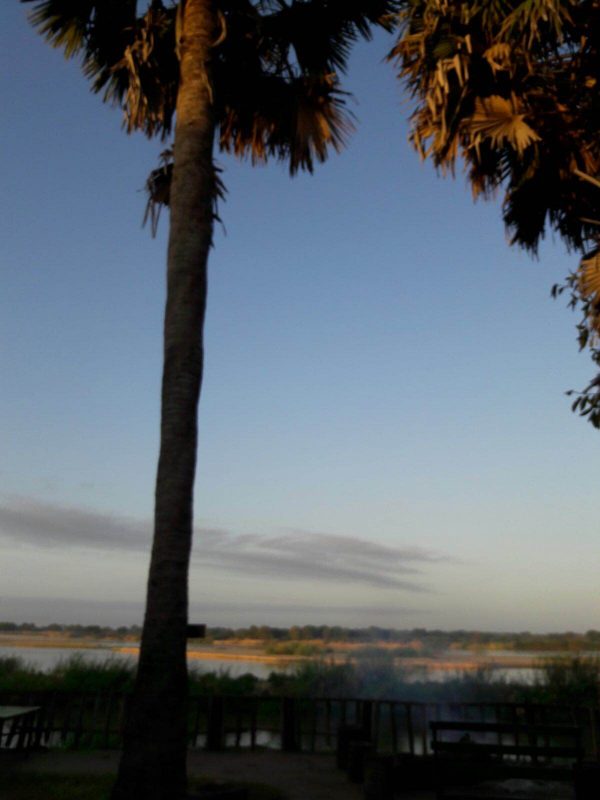 Not a second too soon, one of the staff told us that a safari vehicle was ready to take us to the bush hospital. Two men scooped up Mandy, I grabbed our purses, and off we went. The safari truck was huge and only had two doors. I somehow scaled the side of it (really have no idea how I did this) to get to my seat as the front seat was already occupied by Mandy and the guys when I got to the truck. We drove through the dark village and I’m sure we were a sight to see: a huge ass truck occupied by only four people, Mandy crying as one of the guys held her and told her everything was going to be okay, and me in my pajamas anxiously playing with my blue hair.

When we pulled up to the bush clinic, my heart kind of sunk. At this point, we are all thinking that Mandy is bleeding profusely from her head. The clinic was smaller than the size of the kiosks in the mall that sell cell phone cases, there was no electricity, and the nurse was barefoot and did not speak any English. One of the guys had to hold a flashlight for the nurse as we tried to get a better idea of what was actually going on. When Mandy removed her hands from her head we saw that the coconut did not break any skin on her head, rather on her ring finger, which was the source of all the blood. Thank goodness! That’s a much better alternative than an open head wound.

I cringed as Mandy yelped out in pain while the nurse poured a bright purple solution that must’ve been pure alcohol over the wound. I suggested that we switch to a milder antiseptic, and then the nurse applied a dressing to her finger–after having to send someone to buy bandaids since the clinic did not have any.

When we got back to the lodge, the Indian woman exclaimed, mocking Mandy’s initial reaction, “Ohhhhh, you were saying ‘Oh, my head, my head!’ and look at you now. You’re fine.” I was seething as I walked passed her to get to our table. The staff at The Hippo Camp were really great at taking care of Mandy as best they could. One of the owners of the camp is a well respected doctor and director of a hospital in Dar es Salaam, and arranged for Mandy to be checked out there when we got back to the city. Everyone called us after we left the camp to see how she was doing and how the hospital visit went. We later found out that the camp owners wanted to send a plane the night of the injury to take us back to Dar, but decided against it as it would’ve been dangerous for the small plane to attempt landing and take off in the pitch-black of the bush.

When our safari contact in Dar told us that our package included a walking safari with an armed guide, we assumed that we would be walking through an area of the reserve on foot. We were told to meet our guide for the walking safari outside of The Hippo Camp at 6:00 AM. We were met by a man wearing a loin cloth and smoking “bush marijuana”, which is elephant dung wrapped in a leaf meant to induce psychedelic experiences and improve memories. Our guide also painted himself completely with a grayish paint. 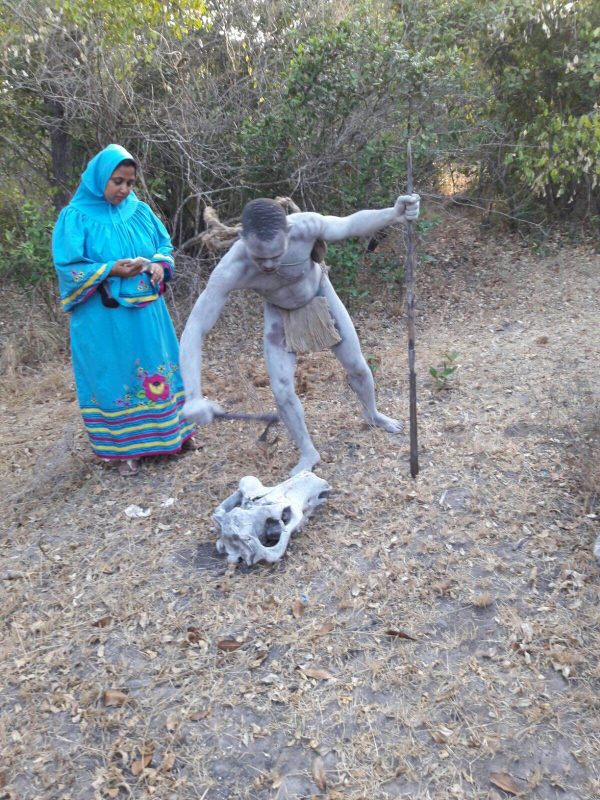 Our guide and the overbearing woman from the night before

The “walking safari” was more of a nature walk merely around the area surrounding the camp. Additionally, it appeared as though our guide was being over the top and putting on a circus show in order to appease Westerners’ perceived idea of how an African tribesman should act. Mandy and I, plus the others in our group, caught on pretty quickly that this was all a show, but you can probably guess who was entertained and taking videos of the guide the entire time. Hint: she is in the above photo.

The walk culminated in our guide picking up a mound of elephant droppings and wringing it like a rag into his mouth. Some people do use this as a survival technique to get water from the dung, but I think it was the fact that it was so clear that our guide didn’t have to use this as a way to get water that made it uncomfortable to watch. Our guide holds a degree in tourism from the tour guide college, is a naturopathic doctor, and is well-spoken and speaks perfect English. In Tanzania, that’s a pretty great hand to be dealt. Also, as we were leaving the camp, Mandy and I saw him dressed in regular clothing and he had washed off all of his paint. The armed guide had also removed his outfit as well, which made me think what they were wearing earlier were more of costumes for the walk than anything else.

Note: I am very, very relieved that Mandy is okay. She is currently volunteering on Mafia Island, and was told that the new leading cause of death on the island is from residents being hit in the head by falling coconuts, which actually isn’t all that surprising–if it hits in the right spot with the right amount of force, it can do some serious damage.

EVER BEEN ASSAULTED BY A COCONUT OR HAD TO GO TO A HOSPITAL ABROAD?

« Safari at Selous Game Reserve
Hitchhiking from Bagamoyo to Moshi »