After hearing a Dutch medical student from my hostel in Dar es Salaam extol Bagamoyo as a chilled-out hippie beach town, I decided to head there after spending a week in Dar. By the way, a week in Dar is too long–3 to 4 days will suffice. I took a dala dala, public shared mini busses that you will see literally everywhere you look in the major cities of Tanzania, an hour north to Bagamoyo for $1 USD.

LIVING THE SIMPLE LIFE IN BAGAMOYO

Allison came to meet me a day later, and we stayed at Firefly Lodge for $15 USD/night  at the recommendation of the medical student. If and when I ever have an apartment or house of my own for longer than three months at a time, I would want to model the decor off of Firefly. It was so colorful, unique, and cozy. Our days were filled simply with yoga, fresh juice, tasty Indian food from one of the two main restaurants, and hanging out with two American expats working in global public health, who gave me major life goals. It was the perfect reprieve from the chaos and heat of Dar. 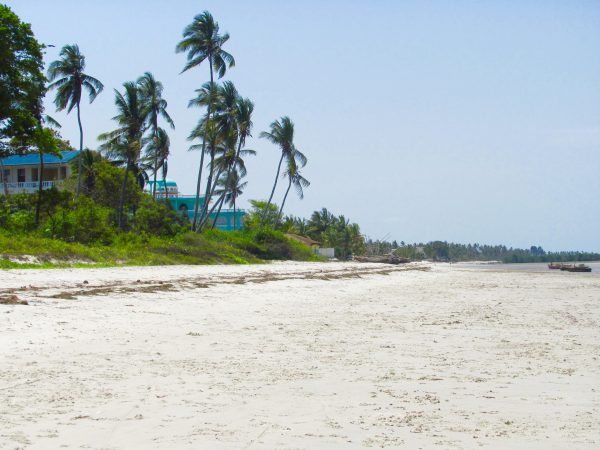 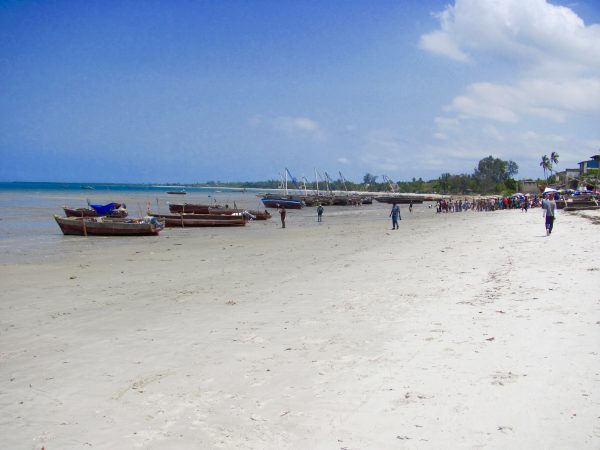 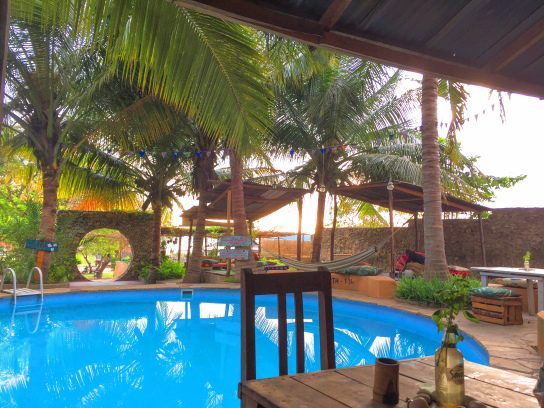 HITCHHIKING FROM BAGAMOYO TO MOSHI

To get from Bagamoyo to Moshi, were told that we needed to take a dala dala from Bagamoyo to Msata, and then a bus from Msata to Moshi. We arrived at the bus station around 7:30 AM and secured actual seats on a dala dala, which travelers in Tanzania will recognize as a luxury. True to form, the driver and conductor (the person who leans out of the window to announce the arrival) waited until the dala dala was filled almost to the brim before we took off. Tip: Although the dala dalas run a specific route, they will stop to pick up and drop off passengers along the way whenever asked. Just when we thought it was physically impossible for one more person to squeeze in, five more would get on. This is Africa!

After about an hour, we were dropped off on the side of the road in Msata, with no sign of a bus station or anywhere to buy tickets. We knew this was the end of the line as all of the other passengers exited the bus, but I noticed a few curious looks from passersby at the two random girls with large backpacks…which can’t be a common sight in this tiny town. It soon became clear that we were supposed to attempt to flag down a coach bus that said “Arusha” (Moshi is before Arusha). Doing this proved to be futile because all of the coaches heading to Arusha from Dar were already filled. Hitching a ride would be the only way we were going to get to Moshi!

After having two semi truck drivers swiftly reject my request to ride with them, a couple in a sedan stopped for us and offered us a ride. They did ask us for a small fee, so I guess it wasn’t technically hitchhiking in the normal sense, but I loved the feeling of boldness that came with hopping in a stranger’s car for a seven hour ride. I also loved the freedom that traveling by car gave us when it came to stopping for breaks to stretch our legs or peruse roadside fruit stands. The couple showed us incredible hospitality by treating us to lunch and snacks, as well as teaching us about their country and interesting landmarks we passed on the way. We were referring to them as Mom and Dad by the end of the drive. They took us all the way to the door of our hostel in Moshi, and Dad went inside to let reception know we were there before we even got out of the car. Travel has taught me so much, but especially that people as a whole are mostly good.

Some friends I told about this were a little worried that we were hitchhiking in Eastern Africa, even though I felt completely safe. Would you take the plunge?