Bungee jumping has been on my bucket list for a while now, and what better place to do it than overlooking the mountains in Chiang Mai? This is a pretty surprising item on my bucket list because I am super terrified of heights, but that is why it was so special for me to tick it off the list. I was so far out of my comfort zone and was doing something that I never thought I would actually do.

I did my jump through X Centre in Chiang Mai. For 2,000 baht ($55 USD) I got one jump, 40 photos, a completion certificate, as well as transport to and from their facilities. The jump is from 50 meters (164 feet), which didn’t sound that high to me until I was up on the ledge! It’s pretty serious.

When I was preparing to jump, I was very scared but there was absolutely no way that I was backing out. The first reason is that bungee jumping in Thailand is much, much cheaper than doing it anywhere in the West. Secondly, you do not get a refund if you don’t jump, and I wasn’t about to waste $55 USD because that goes VERY far in Southeast Asia. 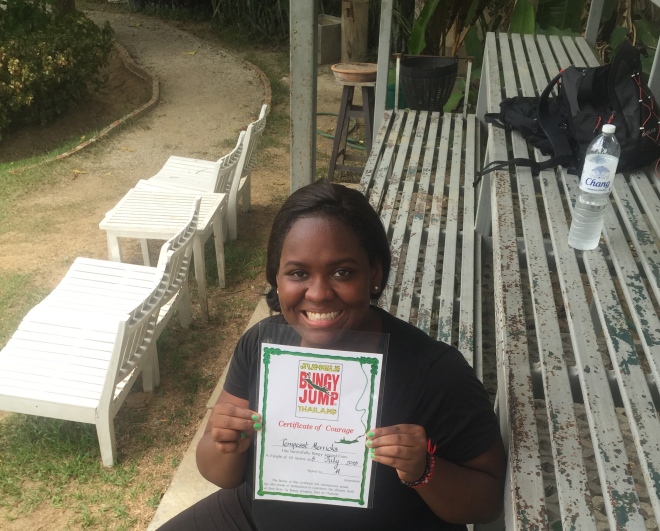 Such a fun day! I tried to attach the video but I am technology challenged 🙂

Have you ever bungee jumped? Where?!